Posted on December 12, 2012 by radiofreemarket

An interview with Dr. Robert Murphy by Andy Katherman

What is Modern Monetary Theory and what does it have to say about economics? Is it correct? Is it a complete crank macro-economic theory? Where does it fall flat? 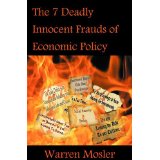 The focus of the interview is the book Seven Deadly Innocent Frauds of Economic Policy written by one of the chief proponents of Modern Monetary Theory, Mr. Warren Mosler. We at RadioFreeMarket.com do not consider this to be a serious book; quite the contrary, we view it as being quite shallow. Our concern is that this is being taken seriously by government policy makers who are using it to justify their ever expanding actions and aspirations.

According to Mosler government can do whatever it wants. He wants us to believe:

Mr. Mosler attempts to convince us that Modern Monetary Theory makes all these concerns irrelevant. In other words, we don’t really have to worry about what government does!

After  listening to this interview, the next time a Rabbit Is Pulled Out Of A Hat you will a) see the trick being attempted on you, and b) not be fooled by it even if it comes at you from a slightly different angle of approach.

Please share this interview with all those you care about (60 minutes).