The Rape of the Cypriots 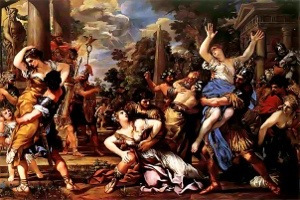 Just where do we begin with the Cyprus story?

Obviously, whenever a politician’s lips move they’re usually telling a deliberate lie, except when they tell the truth by accident. But now everyone in Europe, indeed in the entire world, knows that the IMF and the EU are entirely crooked, right through to their cores. Anyone with more than a single brain cell, from the dumbest socialists through to heroic and complete believers in a totally voluntary society, will never trust anything ever organization ever says again, about any subject, which is all to the good.

For to expose themselves as such charlatans and as such liars in such a naked way as to directly steal other people’s wealth in such a brazen fashion, really does mark the noontide of their freeloading arrogance and their parasitical hubris.

From now on, for both mafiosi organizations, the only way is down. For we have entered the realm where global-aspiring government bodies have decided to treat what they think of as their serfs – to borrow the apocryphal words of Doug Casey – as beef cow rather than as milk cows.

They have crossed their own Rubicon and the die will now run against them.

As Jim Sinclair has reported, Russian oligarchs may have had hundreds of billions of dollars squirreled away in Cypriot bank accounts. For the IMF and the EU to steal 10% of this enormous stash via their joint rapine confiscation is obviously direct criminality of the most breathtaking and gargantuan kind. However, such a height of open theft – all at the stroke of a single crooked bureaucrat’s pen – will also generate geopolitical repercussions which will ring out across forthcoming generations.

Although similar in its metaphysical nature to the Roman Republic’s Rape of the Sabines – a key historical abduction which helped grow the nascent power of Rome – this Rape of the Cypriots will instead lead to a rapid decline of the dreadful paper euro currency and then to a slower decline of the appalling EU itself.

So if we’re to use Roman history as our guide, this criminal act is going to have an effect more like the Diocletianic Persecution of 303 A.D., which tried to wipe out Christianity. This massive government crime completely backfired too and achieved the absolute opposite of its intentions, to the point where the most visible remnant of the Roman Empire has become the Christian Church of Rome, a glorious historical rebuke to Diocletian’s original Historicist and murderous intent.

The IMF and the EU have just tried to savage Russia to save the euro. The result will be the destruction of the euro and the rise of what I hope in its fullest extent might become a 100%-reserve golden rouble.

Though I’ll settle for the simple destruction of the euro, if that’s all that’s on offer.

In the meantime, do what the Russians are going to do. Start turning your paper junk into metal ingots.